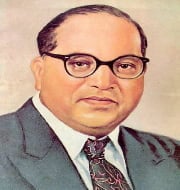 On December 6th 2019, the country observed the 64th Mahaparinirvan Diwas. The day marks the death anniversary of Dr. B R Ambedkar, who passed away in 1956. Ambedkar is considered as the ‘Father of the Indian Constitution’ or the ‘Chief Architect of the Constitution’ in recognition of his role in framing the Indian Constitution. He is a noted follower of Buddhism and is considered a Buddhist Guru by his followers. When he converted to the Buddhist faith, his 500,000 followers accompanied him. His remains were cremated at the Chaitya Bhoomi, which is in Dadar Chowpatty in Mumbai.