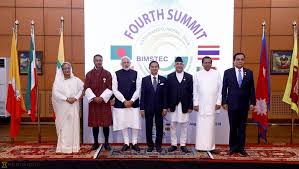 The fourth Bay of Bengal Initiative for Multi-Sectoral Technical and Economic Cooperation (BIMSTEC) summit was held in Kathmandu, capital of Nepal. The theme of the summit was ‘Towards a Peaceful Prosperous, and Sustainable Bay of Bengal Region’. India was represented by Prime Minsiter Narendra Modi. This was his fourth visit to Nepal after becoming Prime Minister in 2014

BIMSTEC is regional grouping of seven countries in South Asia and South East Asia lying in littoral and adjacent areas of Bay of Bengal constituting contiguous regional unity. It was established on 6 June 1997 through Bangkok Declaration. It is headquartered in Dhaka, Bangladesh. The first BIMSTEC summit was held in Thailand in 1997, second in India in 2008 and the third in 2014 in Myanmar.
Member countries: India, Nepal, Bangladesh, Bhutan, Sri Lanka from South Asia and Myanmar, Thailand from South East Asia. They are collectively home to around 1.5 billion people which constitute around 22% of global population and has a combined gross domestic product of $2.8 trillion.
BIMESTC’s prime objectives: Promote technological and economic cooperation among south Asian and south East Asian countries along the coast of the Bay of Bengal. BIMSTEC is sector-driven cooperative organization, starting with six sector including trade, technology, energy, transport, tourism and fisheries. In 2008, it was expanded to embrace eight more sectors including agriculture, public health, poverty alleviation, counter-terrorism, environment, culture, people to people contact and climate change.

India has been pushing for making BIMSTEC vibrant forum for regional collaboration as cooperation under South Asian Association of Regional Cooperation (SAARC) framework is not moving forward. India has been maintaining that it was difficult to proceed with SAARC initiative under current circumstances citing continuing support to cross-border terrorism from Pakistan. Pakistan was also blocking connectivity initiatives such as SAARC Motor Vehicles Agreement (MVA). BIMSTEC excludes Pakistan.  India is now pushing for similar pact motor vehicle agreement in BIMSTEC with an aim to enhance regional trade.