20 Years of Kargil War: IAF Commemorates at Gwalior Air Base 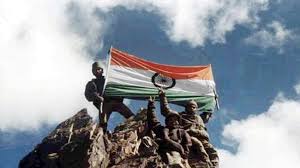 The Indian Air Force (IAF) commemorated 20 years of Kargil War (held between May-July 1999) by turning Gwalior air base virtually into a ‘war theatre’ with a dramatic reenactment of some milestones of 1999 operation such as Tiger Hill Attack.

Mirage-2000 aircraft played a crucial role in battles fought during 1999 war and also hit enemy targets bunkered in at Tiger Hill. One of the Mirage 2000s also showcased Spice bomb carrier, the bomb was used in Balakot airstrike in 2019 February.

Other Scheduled Events: To mark the 20th anniversary of ‘Kargil Vijay Diwas’, a number of celebratory events has been planned by Indian army in Delhi and Dras in J&K for next month. The anniversary celebrations for 2019 be conducted on a nationwide platform from 25-27 July.

It was an armed conflict between India and Pakistan, which ended with decisive Indian victory. It took place between May-July 1999 in Kargil district (of Kashmir) and elsewhere along Line of Control (LOC).

Cause: of war was infiltration by Pakistani soldiers into positions on Indian side of LOC who disguised as Kashmiri militants.

In India, war is also referred as Operation Vijay, the name of Indian operation to clear Kargil sector. During Kargil war, IAF had conducted Operation Safed Sagar as a part of Operation Vijay of the Indian Army.