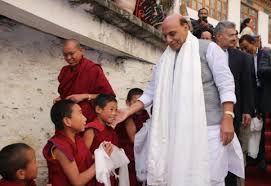 Defense Minister on November 14, 2019 addressed at the 11th Maitree Diwas in Tawang, Arunachal Pradesh. During his address, he announced several new plans of the government to develop the region

Maitree Diwas is a 2-day socio-military cultural program that is jointly organized by Tawang Civil Administration and Indian Army. The program is organized to celebrate special relationship between the people of Tawang and the Indian army. This year, the theme was