What is the difference between a Money Bill & a Finance Bill?

Every bill which has provisions related to financial matters is a Financial Bill. There are three kinds of Financial Bills in Indian parliament viz. 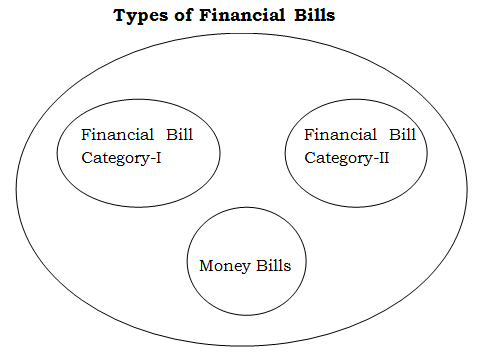 Only those financial bills which contain provisions exclusively on matters listed in article 110 of the constitution are called Money Bills. On this basis, a bill is money bill if:

Question of whether a financial bill is money bill or not, is decided by Speaker. Such bill needs to be endorsed by Speaker when passed by Lok Sabha and sent to Rajya Sabha.

Procedure for Passing of the Money Bills

Example of a money bill is Finance Bill which is introduced with Budget in India. Usually such bill has provisions related to article 110 (1)(a) {imposition, abolition, remission, alteration or regulation of any tax} and is certified as a money bill. It has its endorsement by speaker as money bill and Rajya Sabha has no power to change its fate.

Sometimes, a bill apart from being a money bill {i.e. having provisions of article 110}, may also have other provisions. Example of such bill is Central Road Fund Bill (now Central Road Fund Act), which proposed to establish a non-lapsable fund to impose cess/tax by the Union Government on the consumption of Petrol and High Speed Diesel to develop and maintain National Highways. This bill contained provisions of not only imposition of taxes but also putting its proceeds in Consolidated Fund and withdrawing the same from it for development of roads. It has other detailed provisions on how it will be used, what will be duties of government etc. etc. Thus, apart from being a money bill, it also has other provisions and thus called Financial Bill of Category-I.

A financial bill of category-I is considered same as Money Bill and introduced in the Lok Sabha on the recommendation of the President.  However once it has been passed by the Lok Sabha, it is like an ordinary Bill and there is no restriction on the powers of the Rajya Sabha on such Bills. Rajya Sabha has powers to reject it and also there is a provision of joint sitting in this case.

A financial bill of category-II is one which although has provisions involving expenditure from Consolidated Fund of India but does not have anything mentioned in article 110. We may take the example of “President’s (Emoluments and) Pension Act” to understand this kind of bill. This bill has provisions that money has to be taken out of the Consolidated Fund to pay salary to president but there is nothing in the bill as per provisions of article 110.

Such a bill is ordinary in all respects and both Lok Sabha and Rajya Sabha enjoy equal powers in this bill. However, only special feature of this bill is that recommendation of the President is essential for consideration and passing of these Bills by either House.