The Ministry of Labour & Employment has tabled in Lok Sabha the figures on instances of violation of the Child & Adolescent Labour (Prohibition & Regulation) Act, 1986 found during inspections, along with prosecutions started and convictions made. It indicates following trends: 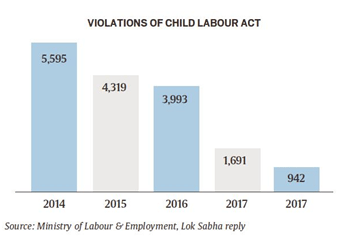 The government is implementing National Child Labour Project since 1988. Under the scheme, children aged 9-14 are rescued/withdrawn from work and enrolled in NCLP Special Training Centres before being integrated with the formal education system whereas children aged 5-8 are directly linked to the formal education system through close coordination with the Sarva Shiksha Abhiyan.

Amendments to the Act

The Child Labour Act was amended in 2016 provides for complete prohibition of work or employment of children below age 14 in any occupation and prohibits employment of adolescents in the age group 14-18 in hazardous occupations and processes.

The amendments made the offence of employing child labour cognisable and provides for strict punishment of employers for violation of the Act.