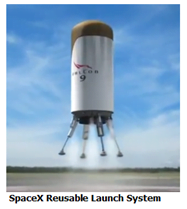 Space travel or space launches involve excessive cost. In the current flying mechanism, the rockets are used for one time only. Once launched, they do their job and fall in Oceans. They are retrieved from Oceans only to reuse some of their parts. Currently, the scientists are trying to create prototypes of such rockets which can be used more than once. The objective of such invention would be to cut cost of space travel or space launch.

Are there any successful inventions?

No experiments have been successful so far. We note here that the NASA’s space shuttles are though designed to be reusable, but they have been proved dangerous and very costly. Some private research labs are trying to design a cost effective reusable space ship to make space sojourn cheaper.

US based organization SpaceX has taken a lead into creating such reusable rockets. The organization through its prototype rocket known as Falcon 9 Reusable (F9R) promises to deliver reusable rockets. In its test flight the F9R rocket successfully completed the height of over 3300 feet and came back to its launching pad on its four legs. The SpaceX claims that such rockets after servicing and refilled with rocket fuel can be readied to fly again.

Reusable rockets if created successfully will be the biggest advancement in rocketry and it should be culminated into higher demands for space flights. It would pave the way for many organizations, even smaller ones, to have their own rocketry system for their purposes in education, research or business. India has a special interest attached to it as being a developing country, our scientists are still exploring many possibilities to send satellites in the orbit in lesser cost and if the reusable rockets are able to do this job, our space programme might get a new boost.