Indian Diaspora in OECD and Europe 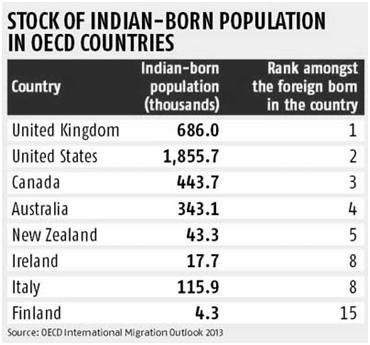 The Indian Diaspora consists of the people who migrated from territories that are currently within the borders of the Republic of India, and also their descendants. About 2.5 Crore strong, the Indian Diaspora covers practically every part of the world. However, in the OECD (Organization for Economic Cooperation and Development) countries it remains concentrated in the Anglo-Saxon (English speaking) countries with scarce to negligible presence in the mainland Europe.

OECD Comprises of 34 of the world’s most advanced developed nations located primarily in Western Europe and North America and out of these only Italy and Finland have Indians ranking among the top 15 of the foreign born. Whereas two-thirds of the Indian Community in EU is found in the UK; rest of the European countries have small concentrations of Indian communities.

The reason for this skewed demography of Indian Diaspora in this part of the world can be found partly in reasons having to do with colonial heritage and language differences and partly in the immigration policies of various non Anglo-Saxon OECD countries.

Historically speaking, the movement of Indians to West Europe goes back to several centuries BC. Indian rulers used to send emissaries to Rome and trade flourished between the two kingdoms more than two thousand years ago also.

A significant wave of Indian migration to Europe came after 1947 in response to a demand for labor and professionals for the post second world war economic reconstruction in West Europe. Throughout the continent immigration laws were relaxed for Asians in until the 70s. Since then, after a surge in immigration from India and other Asian countries, restrictions were imposed again.

In recent years, there has been a small but steady flow of Indian IT experts to the EU member states.

It cannot be denied that in much of Western Europe, India is still thought of as an ancient land of snake charmers and magicians and neither can one totally discredit the remnants of racism that still plagues Europe much more than North America. As a result, relations between India and Western Europe haven’t really warmed up as much as they could have.

On the other hand, it can also not be denied that Europe has suffered much illegal Indian immigration in construction, agriculture and manufacturing sectors. Many illegal immigrants have subsequently regularized their stay by taking advantage of amnesty offers, shortfall of unskilled labor and political asylum grants but this trend is on the decline since west European governments have show strictness and apathy.

Illegal migrants destroy the reputation of western European countries have for a civilized culture and besides; crime networks are often associated with such migrants. Indian illegal migrants have caused some terrible incidents in the past like the Malta migrant shipwreck disaster, which brought a bad name for all countries involved.

The government is therefore trying its best to check Illegal immigration and the profile of Indian Diaspora is said to change in the near future with the rising upward mobility among Indian communities and continued immigration of professionals.