Implications of Return of Vladimir Putin 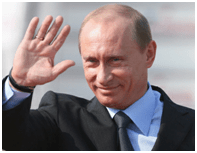 The return of Vladimir Putin as president of Russia embeds the sources of formal and informal power in Russia again in one person. Putin probably realises that his legitimacy as President will critically depend on Russia’s economic performance and Russia will be concerned about its own interests in the countries concerned, although in all cases they are rather limited.

Although Putin has become, by now, firmly associated in the Western mind he will deal with a hard-line approach which is evident when it rejects official American support for Russia’s civil society institutions as interference in its internal affairs. In the field of politico-military relations, the issue of missile defence is absolutely key.

Meantime, Putin is likely to be promoting U.S.-Russian business interaction, to broaden the base of the relationship, still poised shakily on the arms control perch. As regards Europe, Moscow’s agenda is predominantly economic.

Russia’s accession to the WTO free-trade zone arrangement with the EU, Putin can be expected to redouble his efforts to woo the German business community to his version of a greater Europe.

Paris takes second place in Moscow’s order of European priorities, and there, Putin will emphasise economic relations over international political issues, not to speak of values.

Putin will try as hard to engage them in cross-border trade and investment, and to cooperate with China both globally, as within the UNSC and in such public relations exercises as BRICs, and regionally, as in Central Asia by means of the Shanghai Cooperation Organisation.

At the same time, Putin will seek to rebalance the relationship through development projects in Russia’s Far East and Siberia, integration of Central Asian states within Moscow-led bodies, and outreach to Beijing’s neighbours – and rivals – from Delhi to Hanoi.

On the issues pertaining to the Muslim world, Putin will help the U.S. and its NATO allies to transit from Afghanistan across Russia. Moscow’s best bet is an agreement between Tehran and the international community, which allows for some enrichment in Iran under strict international monitoring, but safely excludes two of the worst options: an Iranian nuclear bomb and a U.S.-Israeli attack against Iran. As in the case of North Korea, Moscow will remain sceptical.

As a result, Russo-American relations could experience a new low, and Russo-Chinese ties may grow closer instead. Finally, on developments in the Arab world Putin will continue to insist that international military intervention in the Arab civil wars is inadmissible, and a forcible regime change engineered from abroad is out of the question. And at the bottom level, Russia will be concerned about its own interests in the countries concerned, although in all cases they are rather limited.

Return of Putin and Implications for India:

Vladimir Putin’s return as the president of Russia is good news, as far as India is concerned. It means stability in Russia’s polity and in its external policies. That also means no dilution in the multipolarity of our world order. For the world to not suffer the domination it is necessary for other poles of geopolitical power to remain salient. Russia faces new challenges today, even as continuing problems emanating from Russian nationalism’s overreach whether in giving space for internal diversity, as in Chechnya, or in respecting small neighbours’ political integrity, as in Georgia, offer the temptation to ignore them. The Russian economy has to diversify away from mineral wealth, fiscal policy must evolve to contain expenditure and raise non-hydrocarbon revenue. This calls for igniting the entrepreneurial energies of a traditionally creative people. That cannot be done without decentralising decisions in a framework of genuine democracy. The new Putin regime would need to shed its past authoritarian tendencies, allow dissent, protest, debate and free media to function and flourish. It would be a mistake to hear only the rumbling accusations of electoral fraud and rule out the possibility of the new leadership pursuing such an agenda of renewal.