Cotton is India’s one of the principle crop in India. It plays a vital role in the Indian Economy by providing employment to substantial number of countrymen.

Cotton is also one of the largest foreign exchange earner commodities of India.

As per the “Agriculture Statistics at a Glance 2009” in 2007-08, India’s 9.41 million hectares was under cotton cultivation. In Cotton cultivation area Maharastra leads with 3.20 Million Hectares. However in Production, Gujarat leads all states with a share of 83 Lakh bales of 170 kilograms each. This accounts to 32% share of cotton production in India. The following table shows the cotton production and area under cultivation in 2007-08, which is the latest reliable data. 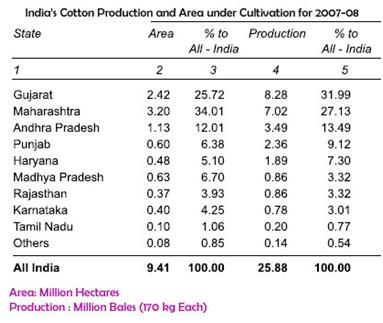 Cotton production is projected at 335 lakh bales for 2010-11 marketing season. The domestic industry demand is around 220 Lakh bales. Government of India had liberalized raw cotton exports since July 2001, dispensing with the system of allocation of cotton export quota in favor of different agencies and traders. Exports of cotton from the country are under Open General License (OGL) since July 2001. The quota fixed for 2010-11 is 55 Lakh bales and the export started from October 1, 2010. However, Agriculture Minister Sharad Pawar had made a statement on 22 September 2010 that there is a scope for increasing it to 75-80 lakh bales.

Imports of cotton into India are under Open General Licence (OGL) since April 1994. From 8th July 2008, the Government of India has abolished the import duty of 10% along with countervailing duty of 4% on cotton imports. Thus, the textile mills in the country are at liberty to import cotton as per their requirements. In 2008 India imported 10 Lakh bales of cotton.

Please note that Gossypium hirsutum (Egyptian cotton ) represents 90% of the hybrid cotton production in India and all the current Bt cotton hybrids are G. hirsutum.

Names of Some Popular Hybrid Varieties of Cotton:

Productivity of Cotton is Poor:

Why there is low Productivity?

GOI assistance is limited to ` 1.50 crores for setting up of new yards and ` 0.90 crores for improvement of existing market yards. Under MM-IV, capital incentive @ 25% of the total cost of modernization / upgradation of Ginning and Pressing factory with a ceiling of Rs. 20 lakh per unit is borne by the GOI and the rest by the entrepreneur. Further, for installation of new bale press
and HVI/MVI laboratories, additional incentive of Rs 7 lakh and Rs. 4 lakh respectively has also been allowed.

Cotton Corporation of India was established in 1970 under Companies Act 1956. It’s a Government of India’s corporate agency, engaged in diverse activities related to trade, procurement, and export of cotton. CCI is governed by Textile Policy 1985 issued by Ministry of Textiles, Government of India. The role assigned to the CCI under the Textile Policy of June 1985 was:

CCI operates in the following states as of now.