Akbar Padamsee is considered one of the pioneers in Modern Indian painting. He was born in Mumbai, India. He met his first mentor Shirsat, a watercolourist in St. Xavier’s High School, Fort. He initially received training in this medium. Subsequently, he attended classes on nudes in preparation for his studies at the Sir J.J. School of Art. Due to his deep understanding about the intricacies of art, he was directly admitted to the third year in Sir J.J. School of Art. It was then where he came in close contact with pioneers of modern Indian paintings like by Francis Newton Souza, S. H. Raza, and M. F. Husain who had formed the Progressive Artists’ Group in 1947. This close association has a deep influence on his work. He has worked with various mediums from oil painting, plastic emulsion, water colour, sculpture, printmaking, to computer graphics, and photography, as worked a film maker, sculptor, photographer, engraver, and lithographer.

In 1951, he went to France where he met the surrealist Stanley Hayter, who became his next mentor. He joined his studio named “Atelier 17”. In 1952, Padamsee’s first exhibition was held in Paris for which he was awarded by the French magazine Journal d’Arte along with the painter Jean Carzou. It was only in 1954, when his first solo exhibition was held at the Jehangir Art Gallery. In 1962, he received the Lalit Kala Akademi Fellowship. He also received a fellowship by the Rockefeller Foundation in 1965, after which he was subsequently invited to be an artist-in-residence by the University of Wisconsin–Stout. In the year 1997, he was honoured with the Kalidas Samman by the Government of Madhya Pradesh. He received many distinctions such as the Padma Shri in 2009 and Padma Bhushan subsequently in the year 2010. He is amongst one of the most valued Indian painters today.

The art of Akbar Padamsee 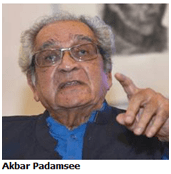 The work of Akbar Padamsee is introspective. His “Metascapes” or his “Mirror Images” are abstract images formed from the search for a formal logic. His topics include landscapes, female nudes, heads and he has done portraits created in pencil and charcoal.

The depth which emerges from his oil-based works emanates from the colored matter. He has also done black and white photographs which use light Padamsee’s heads reflect the radiant presence of the prophets and martyrs who fascinated him during the 1960s.

The “Metascapes” he did in the early to mid-1990s have won him accolades in India as well as abroad and is considered to be his finest work. The distinct identity of the Metascapes is the depiction of Sun and Moon. The idea of using the sun and moon in the metascapes originated when Akbar was reading the introductory stanza to Abhijnanashakuntalam. Here Kalidasa speaks of the eight visible forms of the Lord without mentioning them by name, the sun and the moon as the two controllers of time, water as the origin of all life, fire as the link between man and god, and the earth as the source of all seed. This is the subjection of the denotative sense to a poetic meaning. Through this process, the artist deals with reality without describing it; when poetic meaning is superimposed upon the sign a new form arises – this belongs to the mind of the artist, not to nature.’ (Courtsey: http://akbarpadamsee.net/)

In order to explore new genres, Padamsee created “SYZYGY“, “Events in a Cloud Chamber” films shot in 1970, and explored computers in “Compugraphics”. His painting ‘Reclining Nude’ was sold for USD 1,426,500 in 2011.