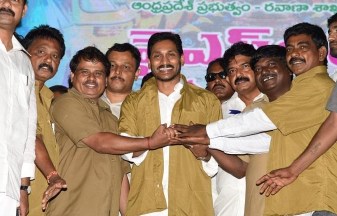 Under the scheme an allowance of Rs.10000 would be given every year to the beneficiaries. It will provide Rs.50,000 to self-employed drivers in 5 years. This amount will be credited into bank accounts directly while processing will be done in a transparent manner.

Beneficiary includes: Self-Employed driver-cum-owners of autos, taxis and maxi cabs of the state.

The annual allowance would be provided to meet the recurring expenses such as insurance premium, licence fee and maintenance of vehicle to procure fitness certificate.

The state government issued a GO in this regard on September 9 to frame guidelines for eligibility criteria. The government also allocated a budget of Rs.400 crore in annual budget for implementation of welfare scheme. Of the total amount the SCs would get Rs.68 crore, STs Rs.20 core and remaining amount is for others.

Out of the 1,75,352 applications received by government 1,73,102 were cleared and the allowance amount was directly credited into their respective bank accounts. Within the state, Visakhapatnam tops the list of beneficiaries followed by Krishna with and East Godavari.

Those people who could not make it on time can apply till month-end and their applications would be considered.