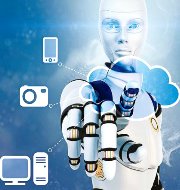 The world’s first robot lawyer named ‘ROSS’ has been employed by a US law firm BakerHostetler.
The first of its kind artificial intelligence (AI) lawyer will assist the law firm and its various teams in legal research. The robot was built by the company ROSS Intelligence and its working is based on cognitive computing.
The project had started in 2014 out of research at the University of Toronto to build an artificial intelligence legal research assistant to allow lawyers to enhance and scale their abilities. The ROSS started functioning with first ten months after they began teaching it bankruptcy law.
Key facts