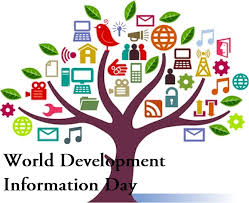 World Development Information Day (WDID) is observed every year on October 24 to draw attention of world to development problems and necessity of strengthening international cooperation to solve them. This day also coincides with United Nations Day (October 24).
Background
The UN Conference on Trade and Development on May 17, 1972 had proposed measures for information dissemination and mobilization of public opinion relative to trade and development problems. These measures came to be known as resolution 3038 (XXVII), which was passed by UN General Assembly in 19, 1972 and instituted World Development Information Day on October 24. It was celebrated for the first time on October 24, 1972. This resolution was passed by UN General Assembly (UNGA) on December 19, 1972. The purpose of day is to improve dissemination of information and mobilization of public opinion, particularly among young people. It will lead to greater awareness of problems of development, thus, promoting efforts in sphere of international cooperation for development.

UNCTAD is principal organ of United Nations General Assembly (UNGA) dealing with trade, investment, and development issues. It was established in 1964 and its permanent secretariat is in Geneva. Its primary objective is to formulate policies relating to all aspects of development including trade, aid, transport, finance and technology. It ordinarily meets once in four years.