Who can be facing life imprisonment on the final ruling of Srebrenica appeal? 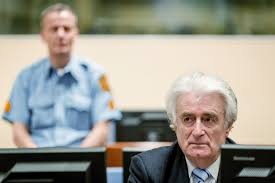 Radovan Karadzic, the final Bosnian Serb leader will soon face the judges of UN appeals for a ruling which will put an end to one of the highest profile law battles emanating from Balkan wars of 1990 which had resulted in the collapse of Yugoslavia.

Karadzic was awarded a sentence of 40 years in 2016 after he was found guilty of genocide of July 1995 Srebrenica massacre in which more than 8000 Muslims, both men and boys were killed by Bosnian Serb forces. He was also considered guilty for carrying out war crimes and other crimes against humanity as being the main brain behind the campaign of ethnic cleansing which saw both Croats and Muslims being forced out from the areas of Bosnia which were under Serb control.

Prosecutors are now seeking another term of a life sentence for him and also one more genocide conviction for his prominent role in targeting non-Serbs all across Bosnia in the starting years of war. Karadzic has on his part appealed against the conviction. People who had lost their loved ones in the war want maximum jail term for him. The judges who were proceeding over the trial had ruled that there was a lack of proof of genocide, the main charge against Karadzic. Conviction of genocide will require an intent to destroy the Muslim and Croat people and not merely driving them away.

The lawyers of Karadzic have stated that his words have been presented in the wrong sense and his name was blackened unfairly. He is seeking that his conviction is overturned and also that the judges should also order another re-run of the seven-year “out-of-control-mega-trial”.

The ruling will have great significance for former Yugoslavia particularly in Bosnia where the communities still remain divided and Karadzic considered as a hero for most of the Serbs in Bosnia. Historians have said that the case of Karadzic is one of the longest and the most important trials which is handled by international tribunals in the aftermath of war. There is however very little scope for retrial or even any kind of significant changes to the previous verdict. It is said that the anti-Croat and the anti-Muslim campaign under Karadzic included setting up of detention camps where all the non-Serbs were held in inhumane conditions, were beaten, tortured and even harassed sexually. Karadzic is said to have led the campaign of shelling and sniping against the civilians during the 44-month siege of Sarajevo which had terrorised the population of the Bosnian capital.