What is Cosmic Yeti? 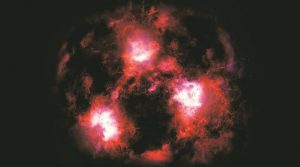 Scientists have accidentally discovered ‘the footprints a monstrous galaxy’ being called as ‘Cosmic Yeti’ in early universe that has never been seen before. The discovery provides new insights into the first growing steps of some of biggest galaxies in universe. The astronomical findings were published in Astrophysical Journal.

The scientists have equated the newly found monstrous galaxy to the mythical Yeti as earlier the scientific community generally regarded these galaxies as folklore, given the lack of evidence of their existence, but recently the astronomers in United States and Australia managed to snap a picture of the beast for first time.

Recent studies found that some of the biggest galaxies in young universe matured extremely quickly, this is something that is not yet understood theoretically.

The “cosmic Yeti” galaxy so far might have been concealed by dust clouds and had as many stars as the Milky Way. It was forming new stars at a rate that was over 100 times faster than in Milky Way.

The major puzzle remains that these mature galaxies appear to come out of nowhere as the astronomers never seem to catch them while they are forming. But now the new finding could provide insights into universe’s infancy.

The research team discovered a faint light blob during observations using Atacama Large Millimeter Array (ALMA) and estimated that light from this galaxy has taken 12.5 billion years to reach Earth.