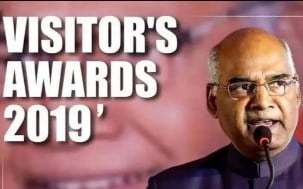 Recipients of Visitor’s Awards 2019 for research in various fields were announced by President’s Secretariat. The award will be conferred by President Ram Nath Kovind at an event to be held at Rashtrapati Bhavan the date for which is yet to be announced.

The Awards will be presented for Research in-

Professor Sibnath Deb: He is from Pondicherry University. He will be awarded for his research in field of child protection, especially his focus on child abuse and neglect, student’s mental health and HIV/AIDS.

Professor Sanjay Puri: He is from School of Physical Sciences in Jawaharlal Nehru University (JNU). He will be awarded for his research in field of non-equilibrium statistical physics and nonlinear dynamics.

Professor Asad Ullah Khan: He is from Inter-disciplinary Biotechnology Unit in Aligarh Muslim University (AMU). He will be awarded for identifying Antimicrobial resistance (AMR) problem in India: mechanism of spread and control of AMR.

Dr Partima: She is from Special Centre for Nanoscience in Jawaharlal Nehru University. She will be awarded for her research on nano biosensors and nano-bio interactions especially early-stage cancer diagnosis using nanomaterials bases biosensing platform.

Dr Shaon Ray Chaudhuri: She is from Department of Microbiology in Tripura University. She is awarded for Technology Development, for developing microbial biofilm reactor for conversion of dairy wastewater into biofertilizer.

These awards were instituted in 2014. Since 2014, President annually confers Visitor’s Awards in various categories to the recipients.

Objective: To promote healthy competition amongst Central Universities as well as motivate them to adopt best global practices in pursuit of excellence.

Selection Committee for Visitor’s Awards 2019: It was headed by Sanjay Kothari, Secretary to President and comprised of eminent persons and academicians, assisted by a Sub-Committee. It made selections through an online application submitted from all Central Universities for each category.

COVID-19: President Ram Nath Kovind to donate 30% of his salary for a year

The President Ram Nath Kovind recently announced that he is to donate 30% of his salary to aid the G...

On April 20, 2020, the Former IAS officer Kapil Dev Tripathi was appointed as the new secretary to t...

Ranjan Gogoi, the former Chief Justice of India nominated to Rajya Sabha by the President

On March 16, 2020, the President of India Ramnath Kovind nominated the former Chief Justice of India...

Portugal President to make a 4-day visit to India

Portugal President Rebelo de Sousa is to make a four-day visit to India. The last visit by a Portuga...

The birth anniversary of the 14th century saint Ravidas was celebrated all over India on Febraury 9t...