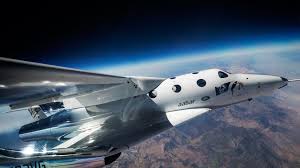 Recently, the test flight of the SpaceShip Two Unity was aborted by the Virgin Galactic. This was because the Virgin Galactic Space Ship Two Unity spacecraft that was released from the mother ship lost connection. This was detected by the computers as the fail-safe scenario and the rocket did not continue. It was a crewed mission without passengers and the pilots landed back safely. The space ship was designed for space tourism.

Virgin Galactic is a commercial spaceline established in 2004 as a part of the UK billionaire Richard Branson’s Virgin group of companies. This company had launched the first manned test of its paceShipTwo spaceflight system from New Mexico in the United States. The objective of this company is “democratising space” by developing and operating space vehicles for individuals and researchers. It aims to initiate space tourism flights from 2021. It currently has more than 600 customers.

The company was founded by Richard Branson.

It is SpaceShip two class suborbital rocket powered crewed space plane. It is being used as a part of the Virgin Galactic fleet. It was designed for suborbital space flights. The launch of space tourism by the company in the spacecraft was cancelled mainly due to October Crash.

It occurred in October 2014 when the SpaceShip two vehicle suffered a catastrophic in-flight break up during a test flight. The space craft crashed in Mojave desert. The accident was investigated by the National Transportation Safety Board