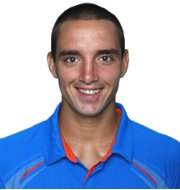 World No. 22 Viktor Troicki from Serbia has won the 2016 WTA Apia International title of Tennis in the men’s single category.
He defended this tittle by defeated Grigor Dimitrov from Bulgaria by 2–6, 6–1, 7–6, (9–7) score in the final match played at Sydney, Australia.
It was overall his third ATP’s single career title after 2010 Kremlin Cup and 2015 Apia International Sydney title.