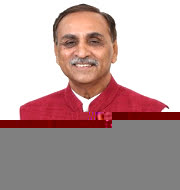 Mr Vijay Rupani (60) has sworn in as the 16th Chief Minister of Gujarat after Anandiben Patel had resigned from the post on August 3, 2016.
He was administered the oath of post and secrecy by the Gujarat governor O.P. Kohli at the ceremony held at Mahatma Mandir in Gandhi Nagar.
Besides, senior most cabinet minister in Anandiben Government Nitin Patel took oath as the Deputy Chief Minister.
Along with them, new council of ministers consisting of 25 ministers also took oath. Out of them 9 Ministers are cabinet Ministers, while 16 ministers are Minister of state (MoS).