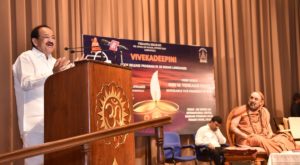 Vice President of India, Shri M. Venkaiah Naidu releases a book titled ‘Vivekadeepini’, a concise book of aphorisms (a memorable expression of a general truth or principle) initially written by Adi Shankaracharya, one of India’s greatest spiritual and literary geniuses.

This short book is a summary of Prashnottara Ratnamalika written by Adi Shankaracharya.

It is a compilation of select 36 verses drawn from 67 verses of Prashnottara Ratnamalika which are written in Question-Answer format.

The verses in this book contain universal truths and are the starting points for reflection. It contains glimpses of India’s wisdom in most lucid language.

This lucid commentary is written by Shri S.S. Naganand and Non-Governmental Organisations (NGO) Vedanta Bharati has taken up this onerous responsibility to connect citizens of India with country’s intellectual tradition and ethical foundations.

He is 8th century Indian philosopher and theologian.

He consolidated the doctrine (or Philosophy) of Advaita Vedanta (Monism).

Advaita Vedanta: states that Brahman is only reality and world is illusory (Maya), thus ignorance of reality is what causes suffering, and liberation can be obtained only by true knowledge of Brahman.

He is founder of Dashanami Sampradaya, Hindu monastic tradition of single-staff renunciation. He is also credited with unifying and establishing main currents of thought in Hinduism.