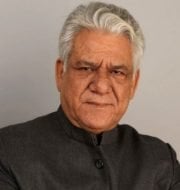 Veteran actor Om Puri passed away following massive cardiac arrest in Mumbai, Maharashtra. He was 66. His acting credits include appearances in commercial Indian, British, and Hollywood, independent films and art films.
He was credited for being part of parallel, new-wave cinema along with Naseeruddin Shah, Shabana Azmi and Smita Patil that brought change in the film industry back in the 1980s.