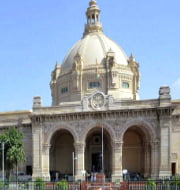 Uttar Pradesh Assembly passed the UP Revenue Code (Amendment) Bill 2016 replacing an ordinance issued by the Governor Ram Naik.
The Bill allows Dalits of the state to sell their land to non-Dalits in the state without approval of the administration even if their remaining holding is less than 3.5 acres.
Key facts

The Bhakti Movement Saint Guru Ravidas Jayanti is being observed on February 27, 2021 across the cou...

On 26 October, 2020, the Government of India announced that Uttar Pradesh secured the top rank PM SV...