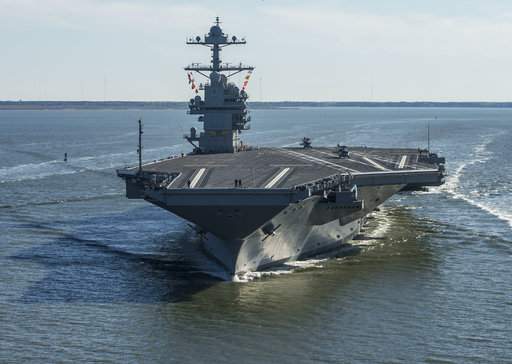 The United States (US) Navy officially inducted USS Gerald R Ford (CVN 78), the world’s largest nuclear-powered aircraft carrier at Naval Station Norfolk, Virginia. It is the most advanced aircraft carrier in the world.
USS Gerald Ford is first in the series of three of the futuristic ships of the Ford-class carriers ordered by US Navy. Its operational deployment will be in 2021 after undergoing final outfitting and testing.

The ship is named after the 38th President of the US Gerald Ford to pay tribute to his lifetime of service to the nation in the US Navy and the US government. Construction on the USS Gerald R Ford started in 2009 and was to be completed by September 2015 at a cost of $10.5 billion.
USS Gerald R Ford weighs 1 lakh tonnes and is 1,106-feet long equivalent to size of about three football fields. It has two nuclear reactors on board that can operate for up to 20 years without refuelling. Compared to earlier Nimitz class aircraft carriers, it rigged with state-of-the-art technology and can carry more aircraft and weapons.
It has electromagnetic Aircraft Launch System (EMALS), replaceing the steam system used on earlier carriers and new electric motor-based Advanced Arresting Gear (AAG) system for faster and more efficient aircraft take-offs and landings. It is also outfitted with touchscreen navigation display in place of a traditional throttle.
It has 2,600 sailors carrying capacity, 600 less crew members compared to earlier carriers due to its double electrical capacity and more automated equipment. It also features new advanced reactor plant, propulsion system, electric plant, machinery control, Dual Band Radar and integrated warfare systems. It has more than 20 new or modified systems compared previous Nimitz class vessels.
Ford-class aircraft carriers
Ford-class carriers are part of the new advanced US aircraft carrier design developed in 40 years, succeeding earlier Nimitz-class class. The second ship in the series USS John F. Kennedy (CVN 79) is under construction and work on the third carrier USS Enterprise (CVN 80) has begun.