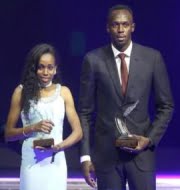 About IAAF World Athlete of the year award

The awards are presented annually by the International Association of Athletics Federations (IAAF). The winners are chosen by athletics officials, athletes, journalists and an online public poll.