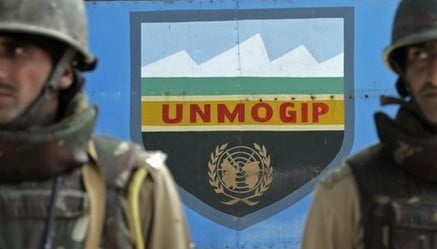 UNMOGIP has been established by UN Security Council (UNSC) Resolution and started its operations in 1949. It has been tasked with monitoring the ceasefire line or tasked with monitoring the ceasefire line between nuclear-armed India and Pakistan in Jammu and Kashmir. UNMOGIP has 44 military observers, 25 international civilian personnel from 10 countries and 47 local civilian staff. The group is financed by the United Nations regular budget.
Mandate: UNMOGIP’s military observers conduct field tasks (field trip, area recce, field visit and observation post) along LoC. As part of 1949 Karachi Agreement, it also conducts investigations into alleged ceasefire violation complaints, which two parties (India and Pakistan) can submit to it. Its findings of investigations are shared with UN Secretary-General and summary of investigations with two parties.

India has maintained that UNMOGIP has outlived its utility and is irrelevant after the Shimla (Accord) Agreement and consequent establishment of Line of Control (LoC) in 1971. In Shimla Agreement, India and Pakistan had agreed to change ceasefire line to LoC and held that they will resolve their disputes bilaterally without third party interference. In 2014, India had asked UNMOGIP to wind up its work in Kashmir and in 2017, Ministry of External Affairs (MEA) had reiterated that UNMOGIP does not have mandate to monitor situation in Kashmir. However, Pakistan continues to welcome UNMOGIP mission based there. On India opposition, UN Secretary-General has held that given the disagreement between India and Pakistan about UNMOGIP’s mandate and functions, it can only be terminated by decision of UN Security Council.