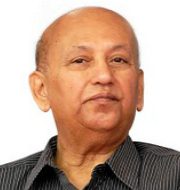 Former ISRO Chairman and space scientist Prof Udupi Ramachandra Rao became the first Indian to be given ‘Hall of Fame’ Award by the International Astronautical Federation (IAF).
Mr. Rao has been selected for the prestigious award for his outstanding contribution to the progress of astronautics within the framework of the IAF activities.
He will receive the award at the 67th International Astronautical Congress to be held in Guadalajara, Mexico in September 2016.

IAF Hall of Fame: It consists of a permanent gallery of these personalities, including biographical information, citation and a picture in a special part of the IAF web presence.