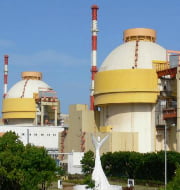 The second unit of Kudankulam Nuclear Power Plant (KNPP), India’s largest nuclear power plant in Tamil Nadu became operational.
The 1,000 Megawatt (MW) capacity plant attained criticality after the second unit became operational. Now the power generation of Unit 2 will be stepped up to full capacity of 1000 MW in phases and will be synchronized with the grid.
The criticality process of the Unit 2 was undertaken by the Nuclear Power Corporation of India (NPCI), a PSU under the Department of Atomic Energy which manages the plant. Earlier, Atomic Energy Regulatory Board (AERB) had given its consent to the NPCI to begin the criticality process.
Already, the first unit of the plant is generating 1000 MW power. So far it has generated 10,006 million units of electricity.