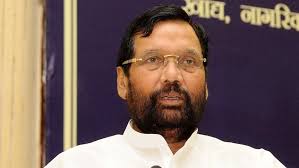 On October 8, 2020, the Union Consumer Affairs Minister Shri Ram Vilas Paswan passed away at the age of 74. He underwent a heart surgery at Delhi’s Fortis hospital.

He founded the Lok Janshakti Party in 2004. He was one of the most noted Dalit leaders of India. He was born in Shaharbanni village in Khagaria, Bihar. He completed law degree and passed the Bihar Civil Service Examination. He was selected to Deputy Superintendent of Police. However, Paswan rejected the offer and joined politics.

Paswan went to jail when the late PM Indira Gandhi imposed emergency in 1975. He was elected to the Lok Sabha for the first time as Janata Party member in the elections that followed emergency. He has been elected to Lok Sabha eight times. He was an ardent follower of Shri Jayaprakash Narayan. He also became general secretary of Lok Dal.

Paswan has served as Union Minister under five prime ministers of all national coalition. The national coalition were National Democratic Alliance, United Progressive Alliance and The United Front. The One Nation One Ration Card Scheme was being implemented under his leadership.

Paswan’s son Chirag Paswan is also actively involved in Politics. He is the current President of Lok Janshakti Party.

One Nation One Ration Card Scheme

The following are the major benefits of the scheme