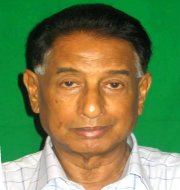 Former Union Minister and 6 time Lok Sabha member Bijoy Krishna Handique passed away in Jorhat, Assam. He was 82.
He was the veteran leader of Indian National Congress from the Northeast state of Assam.
Handique was the senior politician from Assam and was elected to Lok Sabha from Jorhat for 6 consecutive terms from 1991. He was also a member of Rajya Sabha from 1980 to 1985 and has served as a member of several parliamentary committees.
In 1972, he was elected for the first time to Assam Legislative Assembly and later in 1973 he became an AICC member and Congress Working Committee member in 2002.
In the UPA-I government led by then Prime Minister Manmohan Singh, he had held the portfolios of Union Minister of State (MoS) for Defence, Parliamentary Affairs, Mines, and Chemicals and Fertilisers. In the UPA-II government, he had served as Minister for Mines and Development of North-Eastern Region.