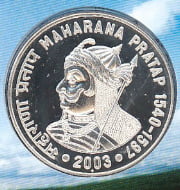 The Union Government has released a commemorative coin of Rs 100 and a circulation coin of Rs 10 as a part of 475th Birth Anniversary celebrations of Maharana Pratap.
The coin was released by Union Tourism Minister Dr Mahesh Sharma in New Delhi. Maharana Pratap, the ruler of Mewar is regarded as one of the greatest warriors in Indian history.
The Union Ministry of Culture has been celebrating the 475th Birth Anniversary of Maharana Pratap during 2015-16 in association with the State Government of Rajasthan.