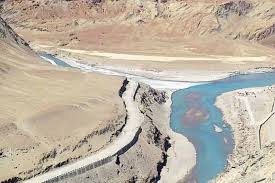 The Union Government is planning to fast-track four projects in Indus river basin to increase irrigation area in Jammu and Kashmir (J&K) by nearly 2.05 lakh acres.
This decision was taken after India had decided to exploit to the maximum the water of Pakistan-controlled rivers Indus, Jhelum and Chenab as per Indus Water Treaty (IWT).
Key Facts
Three projects Prakachik Khows Canal in Kargil, Tral Irrigation Project in Pulwama and restoration and modernisation of main Ravi Canal in Jammu’s Sambha and Kathua are expected to be completed by this fiscal. The fourth project of Rajpora Lift Irrigation is planned will be completed by December 2019.
While the first three projects will help irrigate around 1.45 lakh acres of land, the Rajpora Lift Irrigation is expected to help irrigat around 59,305 acres of land. The funds for these projects will be raised by National Bank for Agriculture and Rural Development (NABARD).
Background
These projects are part of the Union Government’s efforts to irrigate larger swaths across the country by completing small and medium 99 irrigation projects under ambitious Accelerated Irrigation Benefits Programme (AIBP) and Pradhan Mantri Krishi Sinchayee Yojana (PMKYS). Besides, earlier in September 2016, Union Government had decided to review the 56-year-old IWT in the aftermath of the Uri attack, asserting that “blood and water cannot flow together.”
Pradhan Mantri Krishi Sinchayee Yojana (PMKSY): It was launched by the Union Government with an aim to enhance physical access to water on farm. It also seeks to expand cultivable area under assured irrigation, improve on-farm water use efficiency, introduce sustainable water conservation practices, etc through major and minor irrigation projects.
Accelerated Irrigation Benefits Programme (AIBP): It was launched in 1996-97 to provide central assistance to major and minor irrigation projects in the country. It main objective is to accelerate implementation of such major and minor irrigation projects. Since its inception, 143 projects have been completed under AIBP.