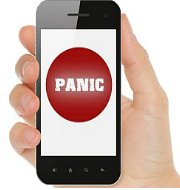 The Union Government has made mandatory for mobile manufacturers to add in-built panic button and global positioning system (GPS) in all phones from January 1, 2017 and 2018 respectively.
In this regard, Department of Telecommunications has notified the Panic Button and Global Positioning System in Mobile Phone Handsets Rules, 2016 under section 10 of the Indian Wireless Telegraph Act, 1933.
Under these rules