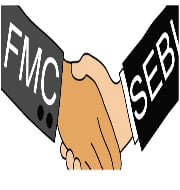 Union Government has notified the merger of commodities market regulator Forward Markets Commission (FMC) with Securities Exchange Board of India (SEBI) with an effect from 28 September 2015.
In this regard, Union Finance Ministry has issued a notification mentioning that

With this merger, all three national and six regional commodity exchanges will come under the ambit of national capital market regulator SEBI.
Implication: This merger will create a unified regulator for commodities and capital markets which in turn will help streamline monitoring of commodity futures trading and curb wild speculations in the market.
Background