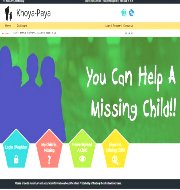 Union Government has launched Khoya Paya web platform for people to directly report, track and upload information on missing children.
It was jointly launched by the Union Minister of Women and Child Development Maneka Gandhi and Union Minister of Communication & IT Ravi Shankar Prasad in New Delhi.
Khoya Paya is joint initiative of the Union Ministry of Women and Child Development (WCD) and the Department of Electronics and Information Technology (DeitY).
The first-of-its-kind web portal will serve as a platform for people to not only report a missing child but also track the efforts towards his or her recovery.
Khoya Paya website has three sections

The reporting to the KhoyaPaya site can be done through text, photographs, videos and other means of transmitting and uploading information.
The website will also provide links to court orders wherein police have been mandated to register an FIR in the matter of a child gone missing and treat it as either abduction or trafficking unless it is proved otherwise in the investigation.