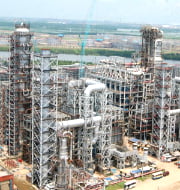 The Union Government has decided to invest 15,000 crore rupees to increase the capacity of Panipat refinery in Haryana to 25 Million Tonnes from existing 15 Million Tonnes.
It was announced by Union Minister of State (MoS) for Petroleum and Natural Gas, Dharmendra Pradhan at a function in Panipat.
Key Facts

Benefits of bio-ethanol plant
Help in solving the chronic problem of straw burning of leftover agro-based produce especially from wheat and rice feedstocks. Benefit farmers economically, as they would be paid for their agro-based produce to extract bio-ethanol. It would also help in preventing the loss of fertility of soil and damage to environment by reducing air pollution.