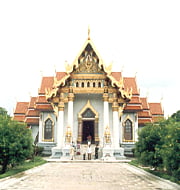 Union Government is going to develop Bodhgaya in Gaya district of Bihar as Spiritual Capital of the country in order to serve the civilisational bond between India and the Buddhist world.
It was announced by Prime Minister Narendra Modi while addressing delegates from 90 countries on the concluding day of the International Buddhist Conclave held at Bodh Gaya.
In his address Prime Minister called Gautam Buddha as India’s crown jewel and called Bodh Gaya as the land of enlightenment.