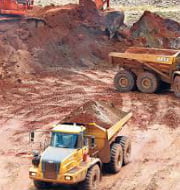 Union Ministry of Environment and Forests (MoEF) has revoked 3 year-old suspension of environmental clearances (ECs) of mines in Goa. It was announced by Goa Chief Minister Laxmikant Parsekar.
This decision will pave the way for resumption of iron ore extraction in the state especially in 72 out of the total 89 approved mining leases.
MoEF decision to lift the ban on mining was taken as per the directives of the Supreme Court (SC).
With revocation of mining suspension, state government now will decide the ore extraction limits for individual miners so that mining output does not exceed the cap of 20 million tonnes (mt) set by SC.
Background