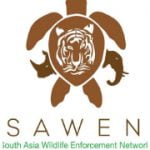 The Union cabinet has given its formal approval for adopting the Statute of the South Asia Wildlife Enforcement Network (SAWEN).
With this, India will become member of SAWEN, a regional inter-governmental body in combating wildlife crime in the region and beyond.
By becoming member of SAWEN, India will strengthen its ties with the member countries for controlling the trans-boundary wildlife crimes through coordination, communication, collaboration, cooperation and capacity building in the region.
What is SAWEN?

India has set following objectives to attain the goals

Background
South Asian region is very vulnerable to wildlife crimes and illegal traffic due to presence of precious biodiversity. It is mainly due to presence of large markets as well as traffic routes for wildlife products in the region. SAWEN was established for mutual collaboration for harmonising as well as enforcing the wildlife protection in the region for effective conservation of such precious biodiversity.

In a joint operation by the forest officials of Assam and Wildlife Crime Control Bureau, a huge seiz...

The recent study by the Zoological Survey of India on Himalayan Brown Bear says that its suitable ha...

India is to see the first five animal overpasses on the Delhi-Mumbai Expressway. The expressway is u...