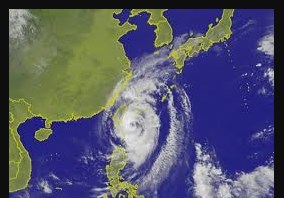 Rapidly-moving Typhoon ‘Mitag’ is bearing down on northern Taiwan, where it is expected to bring high winds and heavy rain. With the worst of the weather expected to arrive in the island country, the warnings have been issued for parts of island’s east and north, including the capital, Taipei.

The Taiwan’s weather bureau has categorized Typhoon Mitag been as at the second-strongest typhoon level.

Taiwan’s weather bureau reported that Mitag was strengthening gradually as it approach the coast of Yilan county at about 27 kilometers per hour with winds gusting at up to 162 kilometers  per hour (100 mph).

The storm’s center is expected to pass just east of the island before heading toward China’s eastern city of Shanghai (on mainland China), then weakening as it moves toward South Korea and Japan.

Typhoon is the regional names for Tropical Cyclones that occurs in Western Pacific and South China Sea i.e. in Philippines islands, eastern China and Japan the tropical cyclones are called typhoons.