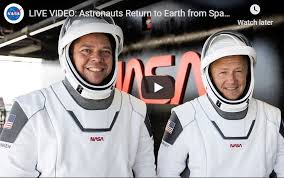 Two NASA astronauts made safe water-landing in the Gulf of Mexico and this is the first time such a thing has taken place since 1975 Mission by NASA. This was also the first astronaut trip to orbit by a private company and two astronauts dropped out in orbit.

Details of the Landing

Suspended under four giant billowing orange-and-white parachutes, the Crew Dragon settled into calm waters near Pensacola, Fla, at the gentle pace of 15 miles per hour. Two small Space X boats arrived at the location to begin the operation to prepare the capsule to be pulled out by the main recovery ship, where crews were there to tend to the passengers of the spacecraft.

Who were the astronauts?

The two astronauts were – Robert. L. Behnken and Douglas. G. Hurley and the conclusion of this voyage of nearly 64 days could be the first step to more people going to space for a variety of new activities like sightseeing, corporate research and satellite repair.

This flight of the Crew Dragon capsule was operated by Space X, the rocket company owned by Elon Musk and it is the part of NASA’s efforts to involve the private companies in certain things it used to do earlier. The main objective is to engage the private players as well in the whole process of space flights.