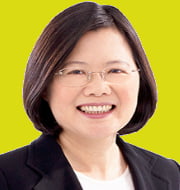 Pro-Independence Opposition candidate of Democratic Progressive Party (DPP) Tsai Ing-wen (59) has been elected as first female and 14th President of Taiwan.
Ms Tsai’s victory is the biggest mandate ever won by a DPP president and is only the second-ever victory for the DPP since Taiwan split with China in 1949.
The first was Chen Shui-bian who also was pro-independence (from China) advocate. During his time as President between 2000 and 2008 tensions had escalated with China.
Background