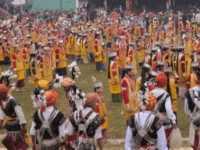 At the time of Independence, India’s North-East region composed of three kinds of entities mentioned below:

Manipur and Tripura were granted the status Union Territories in 1949. On 1 December 1963  statehood was granted for Nagaland. Meghalaya was made an autonomous state within Assam via the Assam Reorganisation (Meghalaya) Act of 1969 as per the sixth schedule of the constitution. In 1972, Manipur, Meghalaya and Tripura were granted full statehood via the North East Reorganization Act 1972 and the Mizo Hills region of Assam and NEFA were converted into a Union Territory. As a result of the Mizo Accord of 1986, Mizoram emerged as a full-fledged state of India in 1987. Even the NEFA (Arunachal Pradesh) was granted full-fledged statehood in 1987.
Meghalaya has organised a week-long programme on the theme, ‘Celebrating Meghalaya-India’, on the occasion of the 47th Statehood Day and the 70th Republic Day.