TRAPPIST-1 planets likely to have water 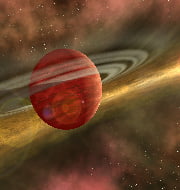 According to international team of astronomers, earth-sized planets orbiting ultracool TRAPPIST-1 dwarf star may have substantial amounts of water and could be habitable.
They had used Hubble Space Telescope (HST), a joint project of European Space Agency (ESA) and NASA to estimate whether there is water on seven planets orbiting in TRAPPIST-1 planetary system.

Astronomers had examined amount of ultraviolet radiation (UV) received by individual planets of system to detect presence of water. UV radiation is important factor in atmospheric evolution of planets as it can break water vapour in atmospheres of planets into hydrogen and oxygen in process called photodissociation.
UV rays with more energy and X-rays heat upper atmosphere of planet, which allows hydrogen and oxygen, products of photodissociation to escape. Hydrogen gas escaped from exoplanets’ atmospheres was dectected by HST indicating it as a possible indicator of atmospheric water vapour.
The results suggest that outer planets of TRAPPIST-1 planetary system may harbour substantial amounts of water. This includes three planets within habitable zone (Goldilocks zone) of star, lending further weight to the possibility that they may indeed be habitable and support alien life.
The observed amount of UV radiation emitted by TRAPPIST-1 suggests that planets could have lost gigantic amounts of water over course of their history. The inner planets (TRAPPIST-1b, 1c, 1d) could have lost water worth more than 20 Earth- oceans- during the last eight billion years. However, outer planets of system (e, f and g) which are in habitable zone might have lost much less water, suggesting that they could have retained some on their surfaces.

The seven Earth-sized planets (named TRAPPIST-1b, c, d, e, f, g and h) orbiting ultracool dwarf star TRAPPIST-1 were discovered by astronomers in February 2017. The TRAPPIST-1 planetary system is 40 light-years away from Earth. Its dwarf star Trappist-1 is at least 500 million years old and is marginally larger than Jupiter. It has temperature of 2550K and shines with a feeble light about 2,000 times fainter than Earth’s sun.