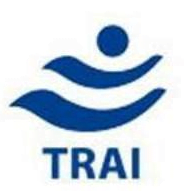 The TRAI has released the Tele-density data of India. Important observations from the TRAI data are listed below:

Telecom Regulatory Authority of India (TRAI) is a statutory body set up by the Government of India under section 3 of the Telecom Regulatory Authority of India Act, 1997. TRAI is the watchdog of the telecommunications sector in India.
The main objective of TRAI is to provide a fair and transparent policy environment which promotes a level playing field and facilitates fair competition and to create and nurture conditions for growth of telecommunications in the country in a manner and at a pace which will enable India to play a leading role in the emerging global information society.
Through an amendment to the TRAI Act, a Telecommunications Dispute Settlement and Appellate Tribunal (TDSAT) was established to take over the adjudicatory and disputes functions from TRAI.