TR Zeliang sworn in as 19th Chief Minister of Nagaland 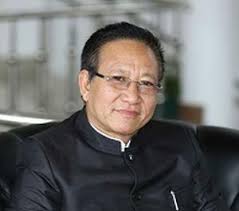 Senior Naga People’s Front (NPF) legislator TR Zeliang (65) was sworn in as the 19th chief minister of Nagaland. He was administered oath to office and secrecy by Governor P.B. Acharya.
Earlier Governor had dismissed the Shurhozelie Liezietsu government under Clause (I) of Article 164 of the Constitution after he failed to prove majority on the floor of the Assembly. Prior to it, Zeliang had staked claim to form government in Nagaland with a majority support of 47 members in the 60 member Legislative Assembly.
TR Zeliang will now have to prove his majority on the floor of the House. This is his second stint as chief minister in a little more than three years.

Earlier in February 2016, Zeliang was forced out of office following large scale protests over holding of urban local bodies election with 33% reservation for women. After his resignation NPF had made party chairman Shurhozelie (80) as the CM. But recently, he faced rebellion from his party MLAs. The Governor had asked the Speaker to summon an emergent special session of the state assembly for the ousted CM Shurhozelie Liezietsu to seek the confidence vote.