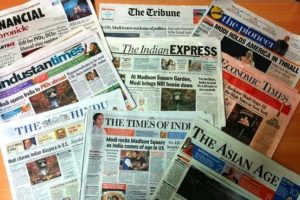 Here are the top News Headlines of 29 August 2019 for all competitive examinations of India.

India has become the first country in the world to issue Biometric Seafarer Identity Document (BSID), capturing the facial biometric data of seafarers. It is a marked improvement over the two finger or iris based bio-metric data.

The Union Cabinet approved the establishment of an international Coalition for Disaster Resilient Infrastructure (CDRI) along with its supporting secretariat office in New Delhi.

Kalinga-FCC Awards for Excellence in Journalism for 2019 were presented in New Delhi. The awards are aimed at encouraging extensive and informed coverage in the global media of India and other SAARC countries.

CCEA has approved the establishment of 75 additional Government Medical Colleges by 2021-22 attached with existing district/referral hospitals under Phase-III of the ongoing Centrally Sponsored scheme.

Kerala has been ranked first while Madhya Pradesh is last on the India Child Well-Being Index introduced in a report by NGO World Vision India and research institute IFMR LEAD. This report provides insights on health, nutrition, education, sanitation and child protection.

100% FDI under automatic route in coal mining and sale of coal as also associated infrastructure activity has been allowed to help attract international players to create an efficient and competitive coal market.

26% FDI permitted under government route for uploading/ streaming of news and current affairs through Digital Media on the lines of print media.

100% FDI under automatic route has been allowed in contract manufacturing to give a big boost to domestic manufacturing.

India Ratings and Research revised downward GDP growth forecast to 6.7% from an earlier estimate of 7.3% for 2019-20 due to weak consumption demand, monsoon and slowdown in manufacturing growth.

Renault launches seven-seater Triber in India, prices start at Rs 4.95 lakh. The new model would bridge the gap between Kwid and company’s other SUV offerings like Duster and Captur

The Bimal Jalan Committee, set up to review RBI’s economic capital framework, has suggested review of the framework after every five years. It has also called for aligning the central bank’s accounting year with the financial year which could reduce the need for paying interim dividend.

India win four medals including one gold at WorldSkills competition in Kazan, Russia

External Affairs Minister S Jaishankar unveiled a statue of Mahatma Gandhi at the premises of the Indian embassy in Moscow on the occasion of his 150th birth anniversary.

US opens a diplomatic mission for Venezuela in Bogota, Colombia

The US opened a diplomatic mission for Venezuela in Colombian capital Bogota, months after suspending its embassy in Caracas as Washington seeks to oust President Nicolas Maduro.

‘Virgin’ to be removed from marriage certificates in Bangladesh

Brides in Bangladesh will no longer have to declare if they are ‘virgins’ on marriage certificates, as per a high court ruling. Men are not required to make any such declaration.

Former Volkswagen Chairman Ferdinand Piech dies at the age of 82

Former Volkswagen Chairman Ferdinand Piech died at the age of 82. He is credited with driving the Germany-based VW from the brink of bankruptcy to become a global empire.