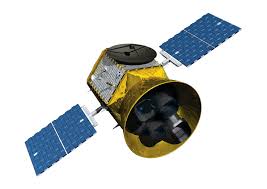 NASA has partnered with private space launching company SpaceX to launch Transiting Exoplanet Survey Satellite (TESS) to search for exoplanets using the transit method.
TESS is designed to carry out first spaceborne all-sky transiting exoplanet survey. It is equipped with four wide-angle telescopes and associated charge-coupled device (CCD) detectors. It is planned to be launched in April 2018 on board of SpaceX’s Falcon 9 rocket from the Cape Canaveral Air Force Station.

The primary mission objective of TESS is to survey brightest stars near Earth for transiting exoplanets over two-year period. It will use array of wide-field cameras to perform all-sky survey. It will create catalog of thousands of exoplanet candidates using transit photometry method.
It will provide prime targets for further characterization by James Webb Space Telescope, as well as other large ground-based and space-based telescopes of the future. With TESS, it will be possible to study mass, size, density and orbit of large cohort of small planets, including sample of rocky worlds in habitable zones (goldilocks zone) of their host stars. This will reveal whether planets are rocky (like Earth), gas or jovian giants (like Jupiter) or something even more unusual.