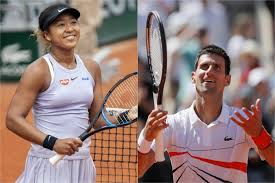 In the latest Women’s Tennis Association (WTA) and Association of Tennis Professionals (ATP) rankings Naomi Osaka of Japan’s and Novak Djokovic of Serbia continue to be as World Number 1.

The latest ATP and WTA rankings were announced ahead of the 2019 Wimbledon Championships that is scheduled to take place at All England Lawn Tennis and Croquet Club in Wimbledon, London, United Kingdom (UK) starting 1 July 2019.

Naomi Osaka: retained the World No. 1 spot by being just 252 points ahead of world No.2 Ashleigh Barty of Australia in unchanged top 20 WTA rankings.

Novak Djokovic: leads the latest men’s ATP rankings ahead of Rafael Nadal (French Open winner 2019) and former World No. 1 Roger Federer. The top of ATP rankings remains unchanged even a week after Nadal claimed the Men’s Singles in Roland Garros title (French Open 2019) with victory over Australia’s Dominic Thiem in final. Roger Federer also lost to Nadal in semis in his first appearance in French Open 2019, Paris since 2015.

In preparation for upcoming Wimbledon Naomi and the French Open winner Ashleigh Barty are playing on grass in Birmingham, England this week.

Roger is currently playing on grass in Halle in Germany as the focus switches to Wimbledon build-up.

About WTA and ATP

It was founded in September 1972 by Jack Kramer, Donald Dell, and Cliff Drysdale (who became 1st President of body) to protect the interests of male professional tennis players. It is the principal governing body of men’s professional tennis.