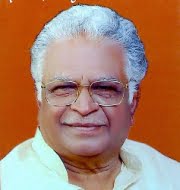 Noted Dalit voice, poet and Telugu writer Prof.Kalakaluri Enoch was conferred with the prestigious Moortidevi Award of Bharatiya Jnanpith for the year 2015.
The prestigious literary award was bestowed upon him for his novel Anantajivanam by Veteren art historian Dr Kapila Vatsyayana function in New Delhi.
His novel Ananta Jeevanam depicts the struggle of the downtrodden, weak and the common man in Rayalaseema to preserve the historical and cultural inheritance of the region during a devastating cyclone.